0
You have 0 items in your cart
Go To Shopping

The world’s fastest-growing crime is growing fast in Utah. Both parents and community members can take measures to fight the battle against modern-day slavery.

If you suspect someone is being trafficked, please call and report to Federal law enforcement:

If you are being trafficked, please call the National Human Trafficking Hotline:

or text HELP or INFO to

In 2018, the “Utah Attorney General’s (Utah AG) Office investigated 49 different human trafficking cases,” and prosecuted 8 people (1). In July this year, the AG Office arrested over 70 individuals in one sting operation, which is more than the office arrested total in 2018 for the same crime. This case shows that even Utah is not safe from the world’s fastest-growing crime.  Sex and labor trafficking happen daily in Utah, according to the Utah AG Office.

Some signs Call said indicate a person is being trafficked:

Most often, traffickers hunt for victims at “malls, parks, and schools.”

The internet is a hotbed for traffickers to find victims in Utah. FBI and Internet Crimes Against Children (ICAC) investigations over the past few years have uncovered numerous online operations. Both agencies have uncovered several “people in St. George that pay and fund human trafficking” (2). These operations mostly took place in online chat rooms, but traffickers also lurk on social media sites such as Facebook, Instagram, Snapchat, and Twitter.

On October 9, an Arizona politician Paul Petersen was charged in Utah, along with Arkansas and Arizona, with “human smuggling, sale of a child, fraud, forgery and conspiracy to commit money laundering” (3). He ran a scheme promising pregnant women from the Pacific Islands up to $10,000 each to come to the United States, give birth, and then give their children up for adoption.  Once they arrived, he crammed them into houses with “little to no prenatal care” (3). Such conditions are extremely dangerous for both the mother and infant (3).

One adoptive family called a house where he kept the women “a baby mill” (3). Some of these so-called baby mills were located in Utah, one of which Petersen sold in the spring. The new owner found trash such as baby diapers all over the property, demonstrating the unsanitary conditions the women lived in. Over 3 years, 75 children were put up for adoption under this scheme. During this time, Petersen brought in approximately $2.7 million from adoption fees and defrauded Arizona’s Medicaid system $800,000. 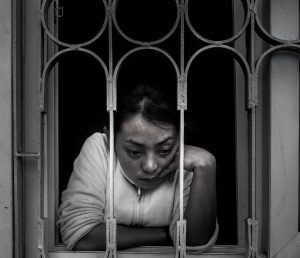 “Trafficked for sexual exploitation and beaten with a metal bar”

On October 3, the Utah AG Office charged Jeffrey Fitzgerald Porter with “aggravated kidnapping,” human trafficking,” and “aggravated assault” (4). One victim met Porter after she bought drugs from him. Describing him as “paranoid,” she said he set up dates for her with other men. She complied to feed her drug addiction. She also feared Porter would react violently if she did not comply. The second victim turned to Porter “when she did not have any money, food, or a place to go.” She then became his girlfriend. He banned her from going to her usual day job and instead made her sell sex “because it was faster” for making money (4). He grew more violent and threatened to kill the victim multiple times. Eventually, he beat both victims with a metal bar in a fit of paranoia.

“There is nothing more vulnerable than a child”

In April, police arrested Ryan A. MacFarlane, a man from Sunset, Utah. He “offered a ride and shelter to a 16-year-old runaway” (5). He then sexually assaulted her and drove her to Colorado and Wyoming. On the road, he tried to force her to sell sex to truck drivers. At truck stops while out of MacFarlane’s view, the minor asked various truck drivers for rides, but all declined. Police later found the girl and returned her to her Utah home, where she started attending therapy. “This is one of the most horrendous crimes we see,” according to Brendan Call, a Utah AG section chief. Showing how large the problem is in Utah, Call also said “we do not think this was a one-time incident.  We see on these types of cases, they perpetrate on this kind of population” (5).

These three recent stories show that human trafficking feeds multiple industries, from illicit prostitution to the usually legal adoption industry. It also feeds the exploitative labor industry, terrorism, and pornography. Traffickers lure in victims by exploiting their needs, whether financial, shelter, or drug addiction. No age group is safe, not adults, teenagers or children.

How To Protect Your Family

Human trafficking is only getting worse in Utah and many criminals are preying on children for their trafficking schemes. Oftentimes, these predators find children over the internet on social media and gaming websites and smartphone apps. Internet filtering systems, such as The Cleaner Net, give parents more tools protect their children from these dangers by blocking dangerous websites and setting time limits. Learning about the signs and how trafficking happens from books, such as the #NorthStarSeries, or from websites, such as the Department of Homeland Security website are great places to start your education. You can also volunteer with Global EP’s Fight For Utah Kids campaign, which was launched in early October.

Previous PostNew Opportunities in 2019!Next PostOrgan Trafficking is a Growing Problem
0Shares

Marren Haneberg is our amazing blog creator and writer. She sheds light on the human trafficking epidemic while educating the public on this important matter. She also creates content for our press releases!